Notice: wpdb::prepare was called incorrectly. The query does not contain the correct number of placeholders (2) for the number of arguments passed (3). Please see Debugging in WordPress for more information. (This message was added in version 4.8.3.) in /srv/data/web/vhosts/www.marc-restellini.com/htdocs/wp-includes/functions.php on line 3903
 Succès Fou Marc Restellini 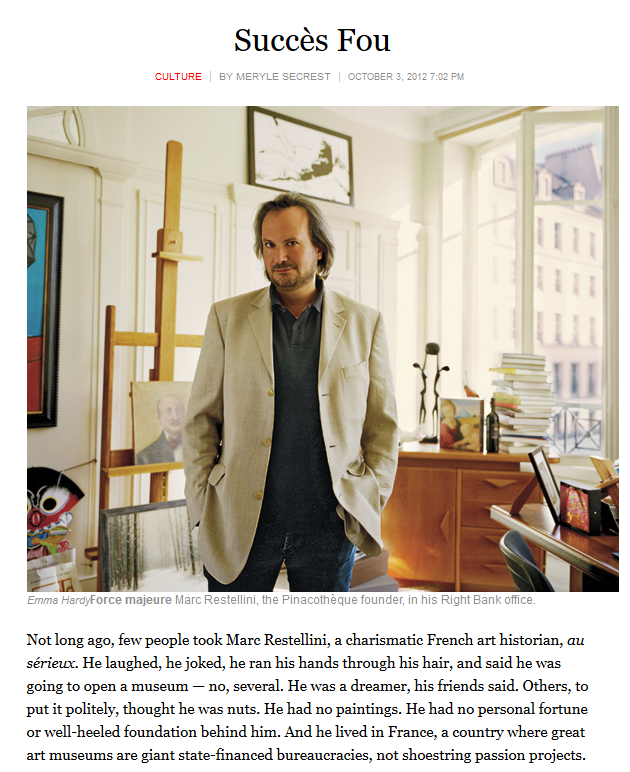 Not long ago, few people took Marc Restellini, a charismatic French art historian, au sérieux. He laughed, he joked, he ran his hands through his hair, and said he was going to open a museum — no, several. He was a dreamer, his friends said. Others, to put it politely, thought he was nuts. He had no paintings. He had no personal fortune or well-heeled foundation behind him. And he lived in France, a country where great art museums are giant state-financed bureaucracies, not shoestring passion projects.

But then, in 2007, Restellini opened a modest gray-walled exhibition space on the Place de la Madeleine, in the heart of tourist Paris. He called it the Pinacothèque de Paris, from a Greek word that means “picture gallery.”